In the first Sunday of Lent, Mark describes (Mk 1:12-15) some of the first activities of Jesus in very concise terms, but they brim with significance. After his baptism, Jesus went .. Jesus had Good News to share, and when the work of John was curtailed by Herod putting him in prison, Jesus took up the task of witnessing. It follows baptism, which according to Peter (1 Pt 3:18-22) saves you now.. a pledge made to God from a good conscience, through the resurrection of Jesus Christ. Our baptized existence, one that is reborn through the death and resurrection of Jesus, is itself a witness to the Good News. But this witness needs a voice, it needs hands and feet, so that the audience may hear, see and experience it. I have a voice, I have hands and feet. Am I witnessing to others? If I am not, what am I waiting for?
Posted by Jeff Tan at 12:24 PM No comments:

One of the things that seem etched into Man's heart is a sense of calling, something that pulls beyond what is immediately obvious, that there should be something more to life than whatever there seems to be. I grew up on stories with heroes in them, from the fictional to the historical, from the Old Testament heroes like Samson and David, to brief stories of the saints like Christopher and Francis of Assisi. And the mythical Norse heroes to the Greek, Arthur and his knights, Charlemagne, Roland and the paladins. Lapu-lapu, Rizal, Bonifacio and the heroes of more than a century ago. They all had callings of significance, and I could feel it in my bones that I had mine. Probably not the same that they had, probably not as big, but just as exciting and full of adventure and surprises. 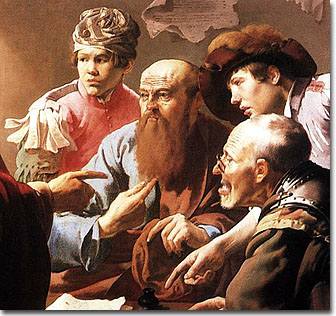 It is probably just as well that I encountered St Josemaria Escriva at some point, and I learned the most amazing thing that makes incredible sense: the call to do ordinary things extraordinarily well -- supernaturally well, in fact. This Lent calls me to an opportunity to be returned to myself (not for me to return to myself, as I'd misstated below). To what do I return? For one, that I am called, to sanctify what is ordinary, by turning it into prayer, asking the Holy Spirit to therefore infuse the mundane activities of everyday with supernatural grace. Father and husband. Teacher, thinker, tinker. In today's readings, Isaiah proclaims God's call to holy ordinariness in acting with justice and compassion, reverence and faith (Is 58:9-14), and Jesus calls sinners to repentance, but also, as with Levi, to be his disciple (Lk 5:27-32). And this Levi is renamed Matthew, and goes from tax collector to apostle, doing ordinary things, really. Yet how many authors have had their book copied, reprinted, cited, read aloud, translated into dozens of languages, over a period of about 2000 years? Quite a boast, and it started one ordinary day at the customs house, with one extraordinary call!

No one bats an eyelash when one hears of radical diets that shun the intake of, for example, protein, sweets, carbs, etc. We're fairly happy to admit that we don't really need those types of (usually delightful) food too much -- that there is something more important than enjoying them. But bring up the word fasting, apart from a medical context, and one instinctive reaction is, Huh? Fr. Bill today talked about a balance between feasting and fasting (catchy way of putting it). One is appreciated more if it is balanced with the other. Each is done right, done better, in the proper perspective.

Apart from keeping a balance between the two, Isaiah conveys this reminder from God: be consistent. Why do we fast? It is not to win admiration, nor to get paid for my fast. To be heard by God, a fast as prayer. Why should it ever be necessary? Well, it probably isn't, but it is consistent with a sincere and heartfelt prayer. It is a penitential prayer that is incarnated -- made flesh with the physical act of fasting. This is consistent because we are incarnate beings. To please God. Why is that important? Because apart from being Creator, he is our Father. He was delighted in our creation and is delighted when we imitate him. With sincere fasting, a heartfelt and incarnate prayer, we imitate his love when we offer him our love. He doesn't need it, but it is what we were made for, to love. As Isaiah continues to relate to us, to fast consistently, with love, means these (Is 58:1-9):

to break unjust fetters
undo the thongs of the yoke,
to let the oppressed go free,
and break every yoke,
to share your bread with the hungry,
and shelter the homeless poor,
to clothe the man you see to be naked
and not turn from your own kin?
Then will your light shine like the dawn
and your wound be quickly healed over.
Your integrity will go before you
and the glory of the Lord behind you.
Cry, and the Lord will answer;
call, and he will say, ‘I am here.’

Email ThisBlogThis!Share to TwitterShare to FacebookShare to Pinterest
Labels: Lent

Lent: a Journey to Discovery

Two days ago, on Ash Wednesday, I began a journey. There's a Lenten calendar that I think the archdiocese put out, and it urges: Return to yourself. Words are almost invariably set within a context, so those words are certainly loaded, but they are also true. We set aside the trappings and the peripherals and go to the bare desert. As some put it, we revisit the innocence of our baptism. And I start with the ashes: reminding me that I came from dust, and to dust I shall return one day.

In the depths of my heart, I already know the answer: no, that is not all there is. While true, there is more to me than dust, and I did not emerge from dust on my own, nor by accident.

Then earlier today, Thursday, yet another truth is revealed: I set before you life or death, blessing or curse (Dt 30:15-20) -- choices. Life is about choices. But if I am but dust, then what is the point of making choices? Aha! I know instinctively that choices do matter, usually the difficult ones: they usually reflect a significant goal. ‘If anyone wants to be a follower of mine, let him renounce himself and take up his cross every day and follow me' (Lk 9:22-25).

Email ThisBlogThis!Share to TwitterShare to FacebookShare to Pinterest
Labels: Lent

What's up and down in Christendom today?

NewAdvent: George Weigel: Divide and Conquer
LifeSiteNews: White House claim that 98% of Catholic women use contraception a ‘damned lie’: Lutheran author
LifeNews: Every Catholic Bishop Opposes Obama Mandate, Lutherans Too
Pope Benedict XVI: Unity In The Church Is A Divine Gift Which Must Be Defended

And everything above has something to do with the longed for unity of all Christians under the one, holy, catholic and apostolic Church. Unity is strength, and divisions bring grief and scandal. The message -- the Gospel -- is being obscured, obfuscated and trampled upon.

Bishop: the world is ignoring the massacre of my people

Please pray for Sudan (CatholicHerald.co.uk)
Posted by Jeff Tan at 2:30 PM No comments:

The Pharisees .. demanded of him a sign from heaven, to test him. And with a sigh that came straight from the heart he said 'Why does this generation demand a sign? I tell you solemnly, no sign shall be given ..' And leaving them again .. he went away to the opposite shore. (Mark 8:11-13)

You can imagine how it could have happened. The arrogant demand for a sign, the eyes betraying the thought: "Nah, don't bother. I know your game. You're a fake: you can't do it." You can also imagine the frustration as Jesus fetched such a deep sigh, jumps on a boat, fleeing for the opposite shore.

How do we pray? St. James tells us in his letter:

If there is any one of you who needs wisdom, he must ask God, who gives to all freely and ungrudgingly.. But he must ask with faith, and no trace of doubt.. (James 1:1-11)

So there we have it, in the example of asking God for wisdom: ask, don't demand (and don't test), but with confidence. Why with confidence? Well, God loves you.. doesn't he? By faith, we know: yes he does. So every doubt is is not just lack in confidence: it is a lack in trust.
Posted by Jeff Tan at 12:42 AM No comments: